Eldridge police chief Joe Sisler points out something to Hudson McKearney, held by his father Kyle, Friday at the Eldridge Community Center. Hudson, 4 and diagnosed with leukemia but now in remission, was sworn in as an honorary police officer because he wants to be a police officer when he grows up.

Shop our large collection of gifts that women actually want! Find unique & easy holiday gifts. Every order gives to a charity of your choice.

Hudson McKearney flexes after being sworn in as an honorary police officer Friday at the Eldridge Community Center. Hudson, 4 and diagnosed with leukemia but now in remission, wants to be a police officer when he grows up. 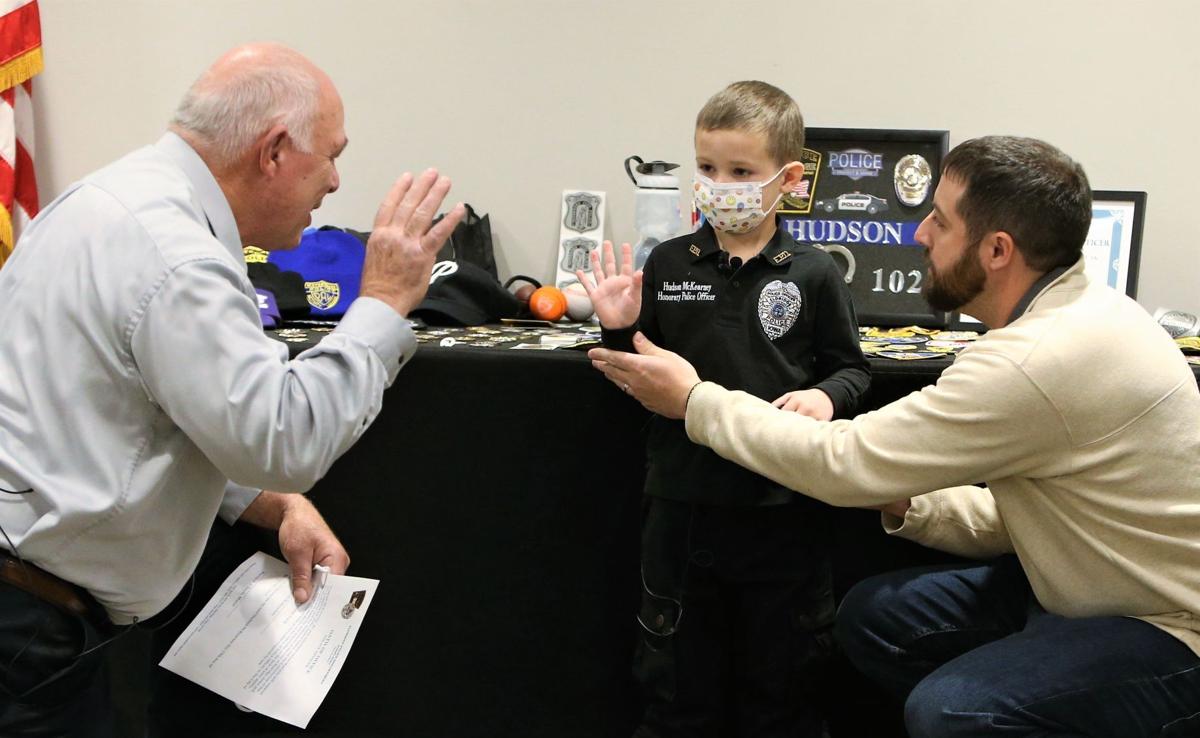 Eldridge Mayor Marty O’Boyle swears in Hudson McKearney as an honorary police officer Friday at the Eldridge Community Center. Hudson, 4 and diagnosed with leukemia but now in remission, wants to be a police officer when he grows up. 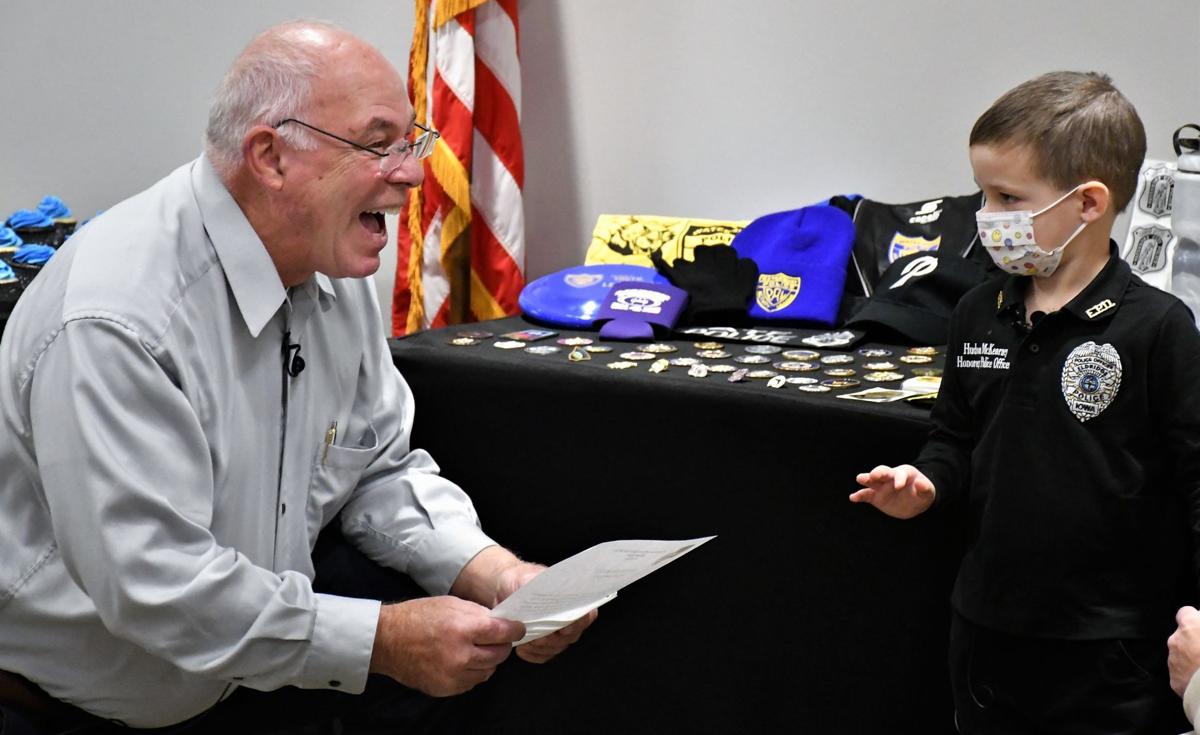 Eldridge Mayor Marty O’Boyle laughs while swearing in Hudson McKearney as an honorary police officer Friday at the Eldridge Community Center. Hudson, 4 and diagnosed with leukemia but now in remission, wants to be a police officer when he grows up.

ELDRIDGE — Hudson McKearney has two dreams: to be Captain America, and to be a police officer. On Friday, one of those dreams came true.

Hudson was sworn in as an honorary Eldridge police officer Friday by Eldridge Mayor Marty O’Boyle. His badge number is Eldridge 102, and he’ll be a member of the police department forever.

Hudson, who is 4, was diagnosed with acute lymphoblastic leukemia just before his 2nd birthday. He has had more than 15 life-saving blood transfusions and is now in remission, but he will still need chemotherapy until May 2022 and will likely need continued treatment for the rest of his life.

“Hudson kind of stole our hearts a few months ago,” Eldridge Police Chief Joe Sisler said as he introduced Hudson before his swearing in.

The Eldridge community center was full of family, friends and community members who cheered Hudson on as he was sworn in. Officers from several departments were in attendance at the ceremony, including the Eldridge Police Department, the Scott County Sheriff’s Office, the Cedar Rapids Police Department and even Iowa State Troopers.

Hudson didn’t say much during the event, but he waved to friends and family and proudly posed for several pictures. Friends and family brought presents and cards for Hudson, and pizza was provided by Hall of Fame Pizza & Wings.

We use cookies on our website to give you the most relevant experience by remembering your preferences and repeat visits. By clicking “Accept”, you consent to the use of ALL the cookies.
.
Cookie SettingsAccept
Manage consent

This website uses cookies to improve your experience while you navigate through the website. Out of these, the cookies that are categorized as necessary are stored on your browser as they are essential for the working of basic functionalities of the website. We also use third-party cookies that help us analyze and understand how you use this website. These cookies will be stored in your browser only with your consent. You also have the option to opt-out of these cookies. But opting out of some of these cookies may affect your browsing experience.
Necessary Always Enabled
Necessary cookies are absolutely essential for the website to function properly. These cookies ensure basic functionalities and security features of the website, anonymously.
Functional
Functional cookies help to perform certain functionalities like sharing the content of the website on social media platforms, collect feedbacks, and other third-party features.
Performance
Performance cookies are used to understand and analyze the key performance indexes of the website which helps in delivering a better user experience for the visitors.
Analytics
Analytical cookies are used to understand how visitors interact with the website. These cookies help provide information on metrics the number of visitors, bounce rate, traffic source, etc.
Advertisement
Advertisement cookies are used to provide visitors with relevant ads and marketing campaigns. These cookies track visitors across websites and collect information to provide customized ads.
Others
Other uncategorized cookies are those that are being analyzed and have not been classified into a category as yet.
SAVE & ACCEPT